I was writing about data scientists and unicorns before.  People somehow believe that data scientists need many conflicting skills. Which is why it is close to impossible to find one in the wild. Just like with unicorns.

Starbucks has a heart for data scientists and brought us a new unicorn-themed Frappuccino.  It is only available for a few more days and is one of the biggest marketing activities from Starbucks I have seen.

Some describe that it “tastes like sour birthday cake and shame”.  But so what?  After all I am one of those data science unicorns so this should be THE drink for me!  I made my daily trip to Starbucks to get one.  But unlike all other days, I found myself surrounded by 12-year old girls going crazy about the new drink.  And when I finally saw this pink-blue-sugar-bomb in the hand of one of the teens I realized: I can’t do this.  I ended up ordering my regular coffee instead.

But what about the “data science unicorn” talk?  The least I could do was to grab an uber-sized paper Frappuccino and take a picture with it.  Since I was accidentally ripping it off a wall, they kicked me out of the shop.  Starbuck’s heart for unicorns is not THAT big after all.* 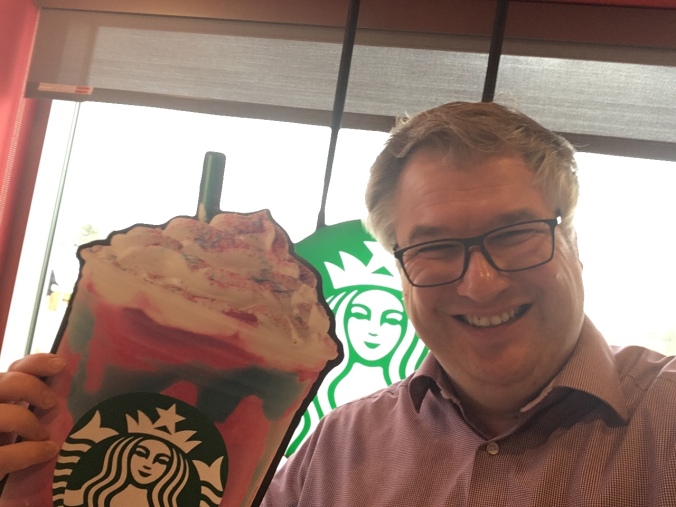 Me holding up a giant paper version of the new Unicorn Frappuccino.  They kicked me out of the shop for accidentally ripping it off the wall.

* I was not actually kicked out of the shop but needed to fix the paper thingy back to the wall.  Understandable.  The baristas would be too busy and already suffer from meltdowns because of the drink.